Scheduled for broadcast on Friday January 22 (9pm), this first-ever UK TV drama from the mind of the legendary Stan Lee is a fresh, original crime drama based around the intriguing concept that a mysterious bracelet could bring its owner tremendously powerful amounts of luck. 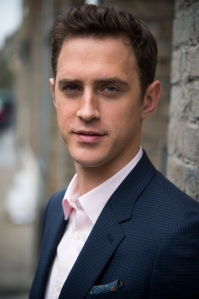 Stan Lee’s Lucky Man has been created by Carnival Films, the multi-award winning producers that brought audiences the global sensation that is Downton Abbey.

Stephen (30), who was born in Doagh and moved to Greenisland when he was 3, attended Carrickfergus Grammar School and then went to attend the prestigious drama school LAMDA (London Academy of Music and Dramatic Art), where he trained until 2007.

Speaking of the show Stephen said: “I play the character Rich Clayton, who is the half-brother of DI Harry Clayton, played by James Nesbitt.

“A compulsive gambler, Harry lost his family home in a poker game and then his wife and daughter left him. He has huge debts, and questions are being asked about his ability to do his job.

“Rich deals in jewellery and antiquities in Hatton Garden. He is totally legit but operates just on the edge of what is acceptable. Rich isn’t dodgy, but he knows people who are. He is happy-go-lucky and Harry’s confidante.

“However, he doesn’t believe in God, magic or anything else. At first, he is a go-to guy who Harry asks if he knows or can find out anything about the mysterious bracelet. However, as the series continues Rich ends up jumping in the deep end with Harry.”

The cast of Stan Lee’s Lucky Man features some of the biggest and brightest TV talent.  And it wasn’t the first time Stephen has worked with fellow Northern Ireland actor James Nesbitt in the past.

He explained: “Being on the show was a fantastic experience. Not only did we have a very talented cast but we also had a fantastic production team and a brilliant script to work with.

“The audience will get to see the real London, which I think is what is unique about this show. The way it has been shot gives it a sense of reality and the scripts have been crafted to include London as another character.

“In terms of working with James Nesbitt, I first met James while I was at drama school. I had my first set visit to Murphy’s Law, where I had a very small walk-on part.

“Cut to 12 years later and I’m acting alongside him so it has all been a bit of a surreal experience. It was that first set visit, where I got to see all aspects of the production and meet James, which convinced me to be an actor. Perhaps it was all fate.”

The storyline of Stan Lee’s Lucky Man makes the viewer consider luck and fate, but Stephen isn’t quite as convinced as the show’s characters that luck can be controlled.

He said: “I believe in fate and the notion that what is meant to be will be. I don’t think luck is anything that you can control. I feel that if something bad happens, then something good is just around the corner.

“What is great about this show is that it makes you question the concept of luck. It puts the discussion out there.

“If I was to think about the luckiest thing that ever happened to me – I’d have to say it was when I met my wife in a bar. Neither of us had intended on being there or wanted to be.

“I was dragged in by my friends and she was there but wanting to leave when we met for the first time. That to me was a big coincidence. I’m very thankful and feel lucky for that chance meeting.”

“The opening sequence of episode one. I remember reading it for the first time and saying out loud, “Wow, this is going to be good!” he said.

Stan Lee’s Lucky Man will be first broadcast on Sky 1 on Friday January 22 at 9.00pm.